Washington DC: what to see in the US capital

Washington DC: what to see in the US capital 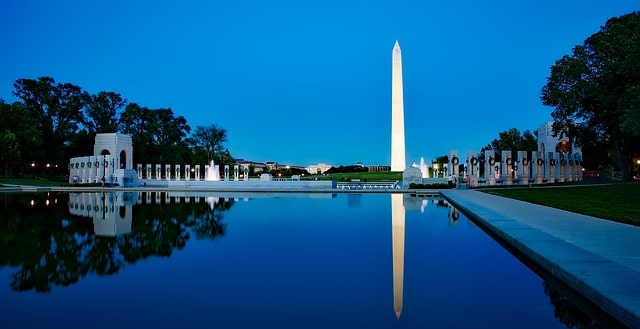 Washington, DC, the landmark and capital of the United States of America, is one of the world’s most identifiable locations. Its famous assemblage of majestic structures and monuments, clustered around the National Mall, has played home to numerous historic events, marches, and speeches. This fantastic setting was not created by chance: Washington, DC is a planned city.

In this essay, we will look at how Washington DC came to be, how it was planned, and how it evolved to become the nation’s metaphorical heart.

Washington DC: What is the meaning of DC?

After the word Washington, the acronym DC denotes the district to which the city belongs, also known as the District of Columbia. As a result, it serves to identify the district of Washington from the city itself. Furthermore, it distinguishes the federal capital, its district, and the state of Washington, which shares a border with British Columbia, Canada.

The states of Maryland and Virginia each ceded territory to construct the Federal District of Columbia, which was formalised on July 16, 1790, with the signing of the Residence Act. It too has a land area of less than 200 km2, borders the Potomac River, and is organised into four quadrants, with the Campidoglio in the centre:

The city was created in 1791 and was named after America’s first president, George Washington. The ultimate purpose was to serve as the capital of the newly independent country, which had declared independence 15 years before.

The United States Constitution permitted the establishment of a city that would serve as the permanent residence of the country’s government and would be independent of any state.

George Washington chose a location on the Potomac River on the country’s east coast as the site for the new capital as a result of a compromise between northern and southern officials.

The engineer’s design, heavily influenced by his birthplace Paris, was a grid of overlapping streets with large diagonal avenues emanating from ceremonial plazas.

The United States Capitol building, which L’Enfant defined as a “pedestal awaiting a monument,” was central to the idea. A mile long and 120 metres broad, in front of the new seat of the country’s central government, sprawled a “great avenue” bordered with several gardens, which would eventually become known as the National Mall.

An equestrian statue of George Washington was intended at the end of this avenue, right across from the Capitol, with the President’s Mansion – The White House – straight north of this monument. To complete the triangle, a diagonal boulevard connected the palace with the Capitol.

However, after a series of disputes, L’Enfant was sacked from the project, as was Andrew Ellicott, who had worked tirelessly to oversee the city and had been entrusted with completing the project.

However, it is reasonable to say that L’Enfant’s plan laid the groundwork for a modern metropolis that grew to become the administrative and symbolic capital of the United States. It is also densely packed with monuments, which we shall discuss later.

First president in the White House

The first two main public structures in the new city were constructed in 1800. President John Adams moved into the mansion once the seat of government was eventually relocated to Washington. The White House was created in the neoclassical style by Irish architect James Hoban.

After the British burned down the city in 1814, both structures had to be reconstructed, and both have been significantly expanded since then. 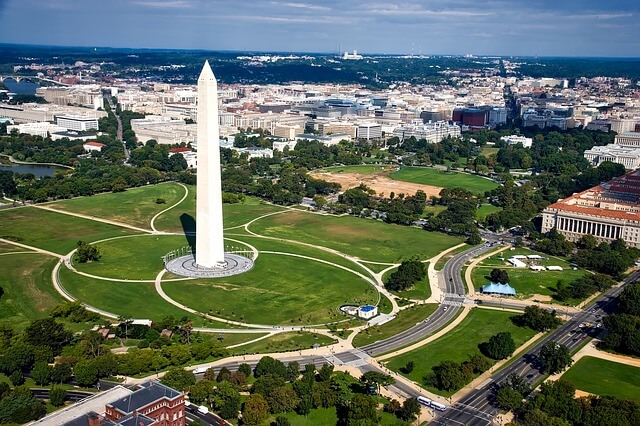 The previously stated equestrian figure of Washington, which was supposed to lead the magnificent avenue, never materialised. Construction of a separate monument honouring the nation’s first president did not begin until 1848.

Although this monument was initially planned to be put right in front of the White House and Capitol, the land at this position proved too unstable to sustain the massive designed obelisk.

As a result, the architect Robert Mills-designed obelisk is 119 metres east of its planned placement. This continues to irritate individuals who like things to be aligned. The obelisk’s construction was interrupted between 1854 and 1877 due to a shortage of money. In fact, approximately a third of the way up the monument, the hue of the stones changes dramatically.

The 169-foot-tall Washington Obelisk, which was finally finished in 1884, remains the world’s highest stone building. It was temporarily the highest man-made building in the world before being overtaken more by Eiffel Tower in 1889.

History of the National Mall in Washington

L’Enfant’s proposal for a ceremonial centre was virtually ignored throughout the nineteenth century. This is because the National Mall was used for less glamorous events than expected. In truth, it was mostly utilised for bivouacs, military parades, livestock slaughter, and weapon manufacture. Although the Mall did not attract much attention at the time, it was enlarged to the west in the nineteenth century.

The Potomac River flowed near the Washington Monument until 1881. A significant flood in the city that year, however, caused Congress to direct the Army Corps of Engineers to dig a deep canal in the Potomac and utilise the excavated material to rebuild the river banks. This recovered site was dubbed West Potomac Park, and it became home to many of the National Mall’s icons.

L’Enfant’s ideal of a grand national capital was threatened in the early 1900s, with buildings erected hastily and encroaching on the commercial core. A railway station, greenhouses, and industrial complexes were among them -.

To address this, in 1902, the Senate Park Commission published the McMillan Plan, which permanently reconfigured the National Mall and positioned it as the symbolic hub of a wider federal district.

This reconstruction design envisaged a cruciform park, with the Capitol building joining the east-west axis and the White House serving as a fixed point at the north-south axis. The Victorian landscaping of the National Mall was also removed, and L’Enfant’s “high roadway” was replaced with the basic 300-foot-wide stretch of grass that exists today.

A number of neoclassical museums and cultural facilities were intended to be built alongside this open space. While the McMillan Plan was not fully executed, its ideas drove the growth of Washington, DC over the following century.

Indeed, the National Mall’s purpose altered throughout this time period, as it became a meeting area filled with prominent structures. The Mall was extended west, as indicated by the McMillan Plan, and finished at the Lincoln Memorial. This memorial is a statue honouring Abraham Lincoln that was constructed in 1922, along with the reflecting pool.

What to see in Washington?

There are several monuments and memorials worth visiting in Washington, including the Lincoln Memorial, the White House, and the Washington Obelisk. The Jefferson Memorial, a monument created in honour of Thomas Jefferson, the third president of the United States, was dedicated in 1943.

To place this monument immediately across from the White House, land had to be recovered from the tidal basin. The resulting unstable ground is still causing issues today.

Among those who have contributed to this monument are:

The Smithsonian Institution, a major museum complex comprised of 19 buildings, may also be found along the National Mall. Let’s go together and tour the most significant museums that make up this massive facility.

The National Museum of Natural History houses a vast collection of natural history items and exhibitions. They range from animal specimens to geology and botanical displays.

For history aficionados, Washington DC is a must-see, especially with the National Museum of American History.

The museum is well-known for depicting America’s lengthy and rich history in a variety of ways. It features specific activities for children, as do many of the museums, including an Innovation Lab that blends STEM, creative, and historical theatrical performances.

THE LARGEST LIBRARY IN THE WORLD: THE LIBRARY OF CONGRESS 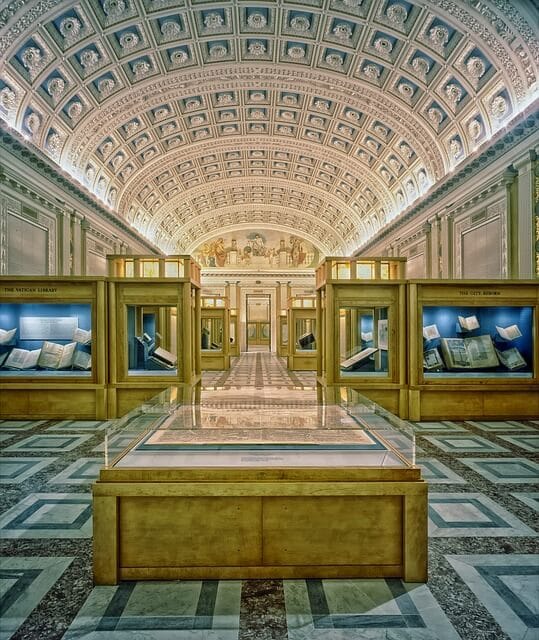 The Library of American Congress

The Library of Congress is not just the world’s biggest library, but it also houses a great museum.

Unfortunately, travellers sometimes ignore this site in favour of the Smithsonian pole’s museums. A 2-hour ride will undoubtedly be worthwhile! Then access is completely free. More information is available on the library’s website.

Except on Sundays, the museum is open daily from 08.30 to 16.30. A Gutenberg Bible, an original King James Bible, and even a First Folio are among the ancient books preserved at the Library of Congress (the complete original works of Shakespeare).

The National Gallery of Art is a Washington-based national art museum that holds major collections of American and European art. What is there to see in this museum?

The National Gallery of Art, being one of the largest museums in the United States, is a focal point in the District of Columbia’s art history community.

This museum has several pieces of art, the most renowned and significant of which are: 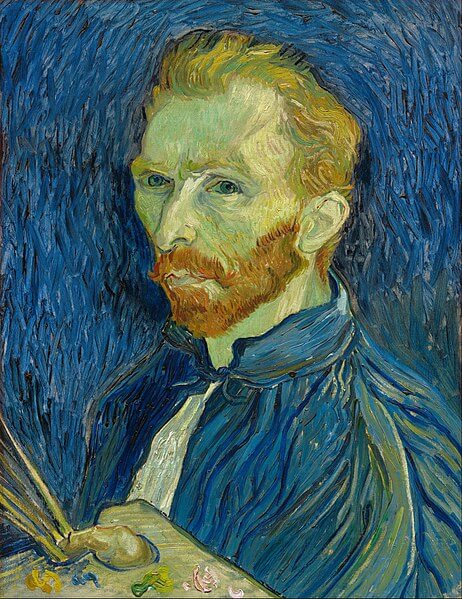 The United States Holocaust Tribute Museum is a living memorial to the Holocaust and its global effect, making it one of the must-see museums.

The museum’s mission is to educate the people about genocide and intolerant crimes.

HOW TO GET TO WASHINGTON DC? MAJOR AIRPORTS

Washington, the capital of the United States, could only be properly serviced by airports. There are three airports in total:

Passengers arriving in Washington from Italy or Europe will very definitely land through Dulles International.

Where is Dulles Airport located?

42 kilometres from the city centre, now in Virginia:

The airport provides a direct link to Rome Fiumicino, with almost 25,000,000 passengers per year (equivalent to Milan Malpensa).

The main terminal is where you check in. Then there are two big halls, A/B and C/D, that are solely dedicated to United Airlines, who have a hub here. TSA PreCheck is available at the airport, which benefits frequent travellers.

There are two ways to connect with the city:

Curiosities about the United States and Washington

In this final segment of our post, we’ll look at some lesser-known facts about Washington, DC and its gorgeous memorials.