Traveling with ESTA to American territories

Traveling with ESTA to American territories 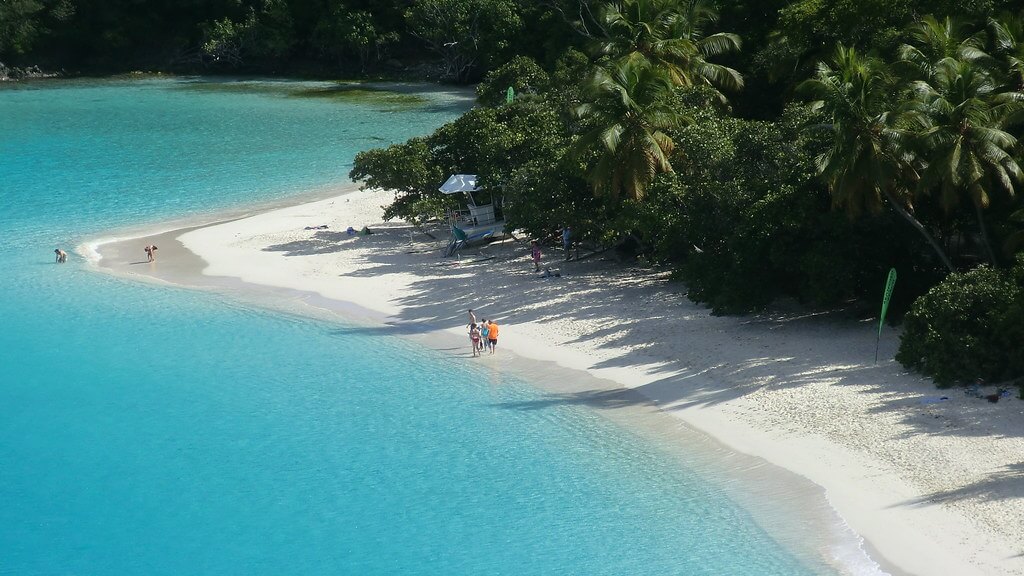 The territory of the United States is not confined to the country’s 50 federal states. Other American territories, in fact, draw thousands of visitors each year. These are primarily Caribbean and Pacific islands known for their gorgeous scenery and lovely beaches.

In this post, we will examine which papers are necessary for travel to the United States’ exterior regions. You will also get basic information on how these areas work as well as recommendations on the important attractions that can be visited in each of them.

Main differences between the American territories and the federal states

American federal states (such as California, Texas, and others) differ significantly from American territories.

There are differences even in the right to vote. The people who live in these territories are mostly American citizens. However, they do not have the right to vote in presidential elections. The people of these islands have no representation in the United States Congress.

The American territories discussed in this article are deemed “unincorporated” by the US. As a result, from the standpoint of constitutional law, the United States constitution only partially applies to the residents of these areas.

Of course, residents of unincorporated territories have the same basic rights as US citizens. Depending on specific US Government provisions, some rights may or may not apply.

Finally, the government of the United States has the authority to cede, sell, or lease unincorporated territories.

All of these regions are classified as “organised.” This signifies that the laws and form were formed by an organic act of the United States Congress. The US government’s organisation frequently has an impact on economically disadvantaged areas.

The territory of American Samoa is the sole exception. Because there is no congressional legislation defining its laws or form of government, this region is officially unorganised. As a result, American Samoa is self-governing.

American territories: main attractions and documents for visiting them

The key tourist attractions in each region are described here. You can also discover further information about the paperwork necessary to visit each of these locations.

Puerto Rico is the biggest and most populous unincorporated territory in the United States. It has a land area of approximately 9,000 square kilometres and a population of over 3 million people. The island’s capital, San Juan, is primarily spoken in Spanish.

WHERE IS PUERTO RICO LOCATED?

Puerto Rico sits in the Caribbean Sea, around 1,600 kilometres from Miami, Florida. It is without a doubt one of the most popular tourist destinations in the United States. Getting there is thus fairly simple:

Puerto Rico is well-known for both its natural and cultural wonders. In reality, it is one of the most historically and culturally rich American regions. Here are some of the primary draws:

If you want to learn more, go to our Puerto Rico page. You will discover more about the city’s history and tourism attractions. 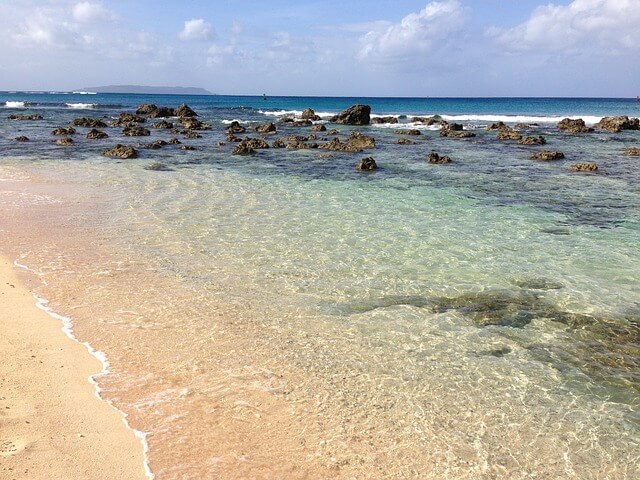 Guam is the second biggest island among the unorganised American territory. In any event, its surface area is substantially smaller than that of Puerto Rico.

The island is 540 square kilometres in size, with a population of somewhat more than 160,000 people. The capital of Guam is Hagatna, while the largest village is Dededo.

Guamians, like the rest of the Territories, are naturalised Americans. The Chamorro are the most frequent ethnic group. It is one of the ethnic groupings that make up the Native American people. This relates to the same-named language, which, along with English, is the most frequently spoken in Guam.

WHERE IS GUAM LOCATED?

Guam is the most western of the American territory. It is part of Micronesia and is located in the western Pacific Ocean. As a result, the island technically belongs to Oceania. Guam is around 11,500 kilometres from the mainland of the United States. This equates to around 12 flying hours.

Guam can only be reached by air, which is the sole mode of transportation accessible. The island does have a port, but it is primarily for commercial purposes.

United Airlines operates the most flights to Guam. A trip from New York takes around 20 hours and includes at least one layover. There are no obvious direct flights from Italy. The only direct flights to Hagatna from the United States leave from Honolulu.

More information on things to see and do in Guam may be found on this website solely dedicated to Guam.

This permits nationals of 12 countries to visit Guam without the need for electronic authorisation or a paper visa. According to this scheme, the maximum length of stay is 45 days rather than 90. The programme, however, is only available to inhabitants of the following countries:

As a result, Italian people will have to observe the restrictions that apply to travel to America and other American territories. Even in this instance, you will require:

The archipelago of the Northern Mariana Islands is the third biggest US territory. It is made up of 14 tiny islands and covers an area of around 475 square kilometres.

Its people are mostly ethnic Filipinos and Chamorros. In addition to Chamorro, the island’s residents mostly speak English and Carolinian. Saipan is the capital of the Northern Mariana Islands. 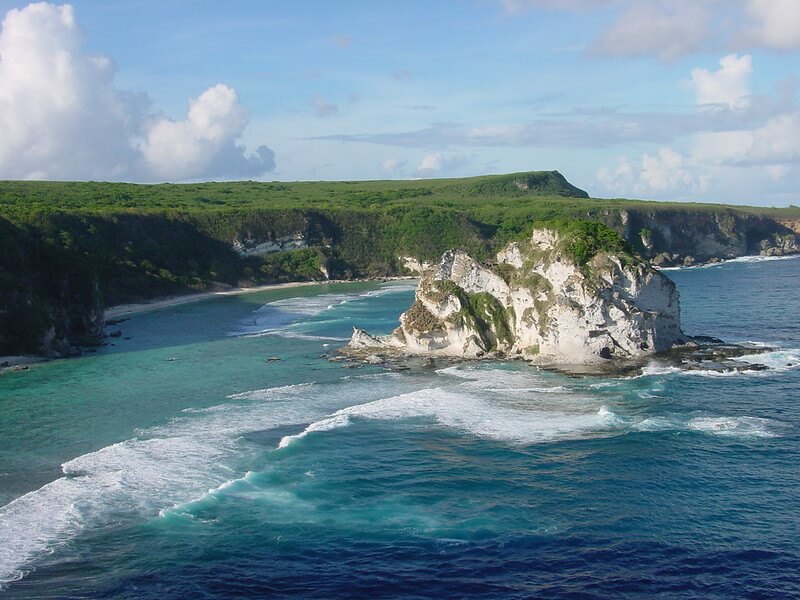 The “Bird Beach” in Saipan

WHY VISIT THE NORTHERN MARIANA ISLANDS?

The Northern Mariana Islands are well-known for their beautiful beaches and hospitable Chamorro culture. Nature, like other American territory, is the major draw of this location.

Among the must-see attractions on these islands are:

We have put up a comprehensive guide for your trip to the Northern Mariana Islands.

Like Guam, the Northern Mariana Islands participates in the Guam-CNMI Visa Waiver Program. Italy, however, is not part of this programme. For this reason, the documents required to visit these islands are the same as those required to visit the United States. You will therefore need:

Charlotte Amalie, the capital, is located on the island of Saint Thomas. The majority of the population is of Afro-Caribbean descent, but the island also has a sizable white population. English is the most widely spoken language, along with the Creole variant of English found in the Virgin Islands.

WHERE ARE THE US VIRGIN ISLANDS LOCATED?

Because there are no direct flights from Italy to the Virgin Islands, it is necessary to first arrive in the United States. The airport serving Charlotte Amalie, on the other hand, is well connected to the rest of the United States. American and United Airlines are the airlines with the most flights to Charlotte Amalie. The most popular destinations are Miami and New York.

WHY VISIT THE US VIRGIN ISLANDS?

The US Virgin Islands, like other American territory, are notable for the beauty of their beaches and natural parks. We propose that you visit the following major attractions:

DOCUMENTS FOR VISITING THE US VIRGIN ISLANDS

Because the Virgin Islands is a US territory, the same immigration regulations apply as they do in the United States. As a result, if you are an Italian citizen, you will require:

By clicking on the link, you can read the whole guide dedicated to the US Virgin Islands.

The final of the American territories we shall discuss in this post is American Samoa. Once again, this is an archipelago, not the autonomous state of Samoa.

This region is barely 197 square kilometres in size and has a population of slightly around 51,000 people. Pago Pago is the capital. The Samoa, a Pacific indigenous people, are the most numerous ethnic group on the island. Although English is widely spoken on the island, this tribe speaks the indigenous language of the same name. 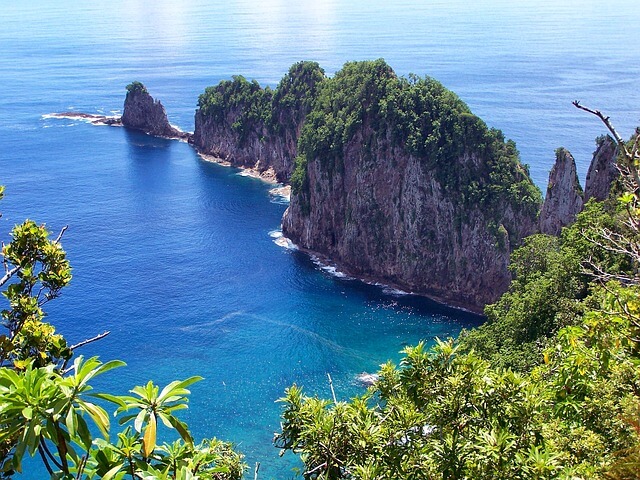 WHERE IS AMERICAN SAMOA LOCATED?

The archipelago of Samoa is located in the northern Pacific Ocean. American Samoa is located around 9,000 kilometres from the United States. As a result, flying is the finest mode of transportation to reach them.

American Samoans are among the poorest of all American territory. Despite this, the sceneries and beaches on these islands are stunning. Here are some places to go:

In this situation, too, because it is a US territory, you must follow the rules prescribed by US immigration law. Italians will require:

For entering American territory, the ESTA electronic travel authorisation is required. As we’ve seen, these impose the identical immigration laws that apply in the United States. As a result, you must apply for ESTA online prior to your journey.

To apply for an ESTA, you must first:

If you want more information on the requirements, or if you need to obtain or renew it, go to the ESTA authorization for the United States page.

The scenery and beaches of Guam, Puerto Rico, American Samoa, the US Virgin Islands, and the Northern Mariana Islands are stunning. As we’ve seen, travelling these regions is no more difficult than visiting the US. In reality, if you are an Italian citizen, requesting an ESTA electronic authorization will suffice. So keep in mind to obtain it on time.