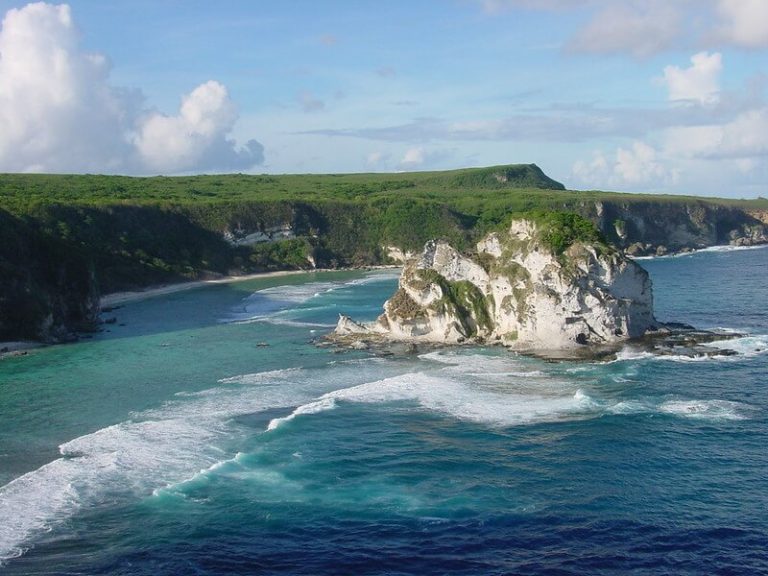 Many people, like the great explorers of the past, have a yearning to travel and discover faraway locations. Ferdinand Magellan, who landed on the Mariana Islands’ coastlines in 1521, is responsible for our knowledge of this fascinating and unique area. When Magellan arrived on the islands, he claimed them for Spain. The name “Marianne” was given to the islands in honour of Queen Marianne of Habsburg, Philip IV’s widow.

The Mariana Islands’ mysteries begin with a short narrative concerning the name. The residents of the islands tried to steal different goods from Magellan and his crew, which is why he dubbed them “Islas de los Ladrones,” or “Robber Islands.” However, the Mariana Islands are now famed for their lovely beaches, pristine oceans, and, above all, the Mariana Trench, our planet’s deepest point.

So our trip to discover the Northern Mariana Islands’ natural beauty and history begins.

The geography of the Mariana Islands

The Mariana Islands are located 11,300 kilometres from the United States in the Western Pacific Ocean. They are about midway between Hawaii and the Philippines, which are approximately 2400 kilometres apart. The archipelago is part of Micronesia and consists of 14 islands that can be classified based on their formation: the islands to the north are volcanic in origin, while those to the south are limestone in origin.

If you take a vacation here, you may actually declare you’ve travelled to the end of the known world. The number of guys who have reached the bottom of the Fossa may be counted on one hand.

When to leave and how to get to the Mariana Islands?

It might be difficult to get to the Western Mariana Islands from Italy. There are no direct flights from either Europe or the United States.

The ESTA visa allows you to fulfil your ambition of spending a vacation in the Mariana Islands. United Airlines operates nonstop flights between the island of Guam and the Northern Mariana Islands. By selecting this mode of transportation, you avoid the need to get additional papers in addition to those listed above.

You may also fly to Saipan Francisco C. Ada Airport from one of three additional airports:

When to travel?
The Mariana Islands have a tropical environment; temperatures range from 29 to 31 degrees Celsius year round, and the island’s waters are always ideal for diving. Precipitation occurs throughout the year, although there are two distinct periods:

We propose visiting the Mariana Islands in February and March to plan the perfect vacation.

Where is the Mariana Trench located?

The Mariana Trench was discovered for the first time between 1872 and 1876, during the Royal Navy’s oceanographic mission Challenger. The highest depth reported at the time was 8,184 m.

The Marianas Trench, which is approximately 200 kilometres east of the archipelago’s islands, has piqued people’s interest from the start. This undersea chasm is located in the Pacific Plate and Philippine Plate subduction zones.

Don Walsh and Jacques Piccard reached the bottom of the Fossa on January 23, 1960, aboard the bathyscaphe Trieste. They are the first guys to have reached the depth of 10,916 metres. They could only halt for 20 minutes owing to the high pressure, but they did spot “a crayfish and a type of sole,” as Piccard put it. One of the most recent studies, conducted in 2011, determined the deepest point to be 10,994 m.

Some of the species found in the hole may be seen in this movie created by the University of Aberdeen in Scotland:

We now know that the submarine volcanoes typical of subduction zones have allowed the development of life forms here as well. Despite this, no one knows what is in the Mariana Trench, which is still shrouded in mystery today.

Saipan: the tourist capital of the Mariana Islands

The island of Saipan serves as the Northern Mariana Islands’ tourist hub. On this island, luxurious hotels, resorts, and restaurants are surrounded by a characteristic Micronesian ambience.

Saipan has some of the world’s most beautiful atolls and many picturesque places to visit, including Bird Island, a small islet off the coast of Saipan. Hundreds of birds and aquatic animals have chosen this small coral reef-protected island as a nesting site.

What to see in Saipan?

These are the key features of Saipan’s “capital”:

The Kalabera Cave is another location of great beauty and importance on the island; the name stems from the cave’s unique form; “Kalabera” means skull in Chamorro. Inside, there are cave drawings created by the indigenous people who lived on the island before the Spaniards arrived. It is believed that this cave was utilised as a burial site and that religious ceremonies were performed there.

The places of Saipan history

The Northern Mariana Islands have been deeply impacted by Second World War events. But, in order to fully comprehend what occurred, we must first take a step back.

The Mariana Islands were bought by Germany in 1899 after being declared a Spanish territory. The “German phase” lasted only a few years; in 1914, the islands were taken over by Japan, who exploited their strategic location. In 1944, US and Japanese troops battled in the Battle of the Philippine Sea, commonly known as the Battle of the Marianas.

The Japanese army was in a terrible condition in the spring of that year. They had lost outposts and goods, and the US advance was still going on. Because Saipan was one of the most significant air bases for the Japanese empire, it was of considerable importance to the United States.

On the island, some 31,000 troops were ready to defend the islands. On June 15, 1944, US troops landed on 300 AMTRACs, kicking off the Battle of Saipan. The bloodbath raged until July 9th. The Japanese soldiers tried to hold out until the very end, but they were defeated. Both sides suffered significant fatalities, with the Japanese army utterly destroyed.

The American Memorial Park is located north of Micro Beach; the swamp forest within is a protected area that attracts a variety of bird species. When you enter the park, you can visit a museum that houses documents and artefacts from the Second World War and the Battle of the Bulge. There are also several memorials that pay tribute to the soldiers who were killed in the violent clash.

The Suicide Cliff, of dramatic memoirs

However, even the depths include valuables like as tanks, ships, aircraft, and a massive Japanese cargo. 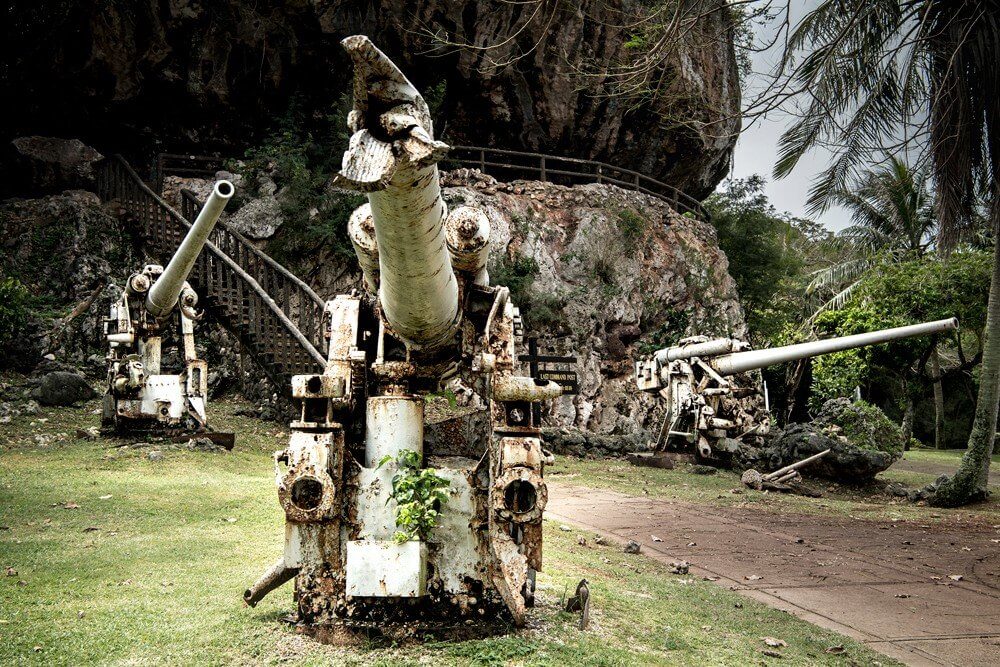 If you visit in April, you can also attend the Flame Tree Arts Festival. The Flame is an annual celebration of the flowering of the flame tree. During the festival, artists, musicians, and dancers come together to put on a spectacular show to celebrate the flowering.

Tinian between beaches and legends

Tinian, the other big island in the Northern Mariana archipelago, lies only 2 kilometres south of Saipan. This island, with a slower pace than Saipan, is great for people looking to rest and unwind.

Unfortunately, this island is most known for being the launch site for the planes carrying the bombs that destroyed Hiroshima and Nagasaki, but Tinian is much more. In reality, some of the Northern Mariana Islands’ most magnificent beaches may be located here:

There are several historical places to visit on Tinian as well. 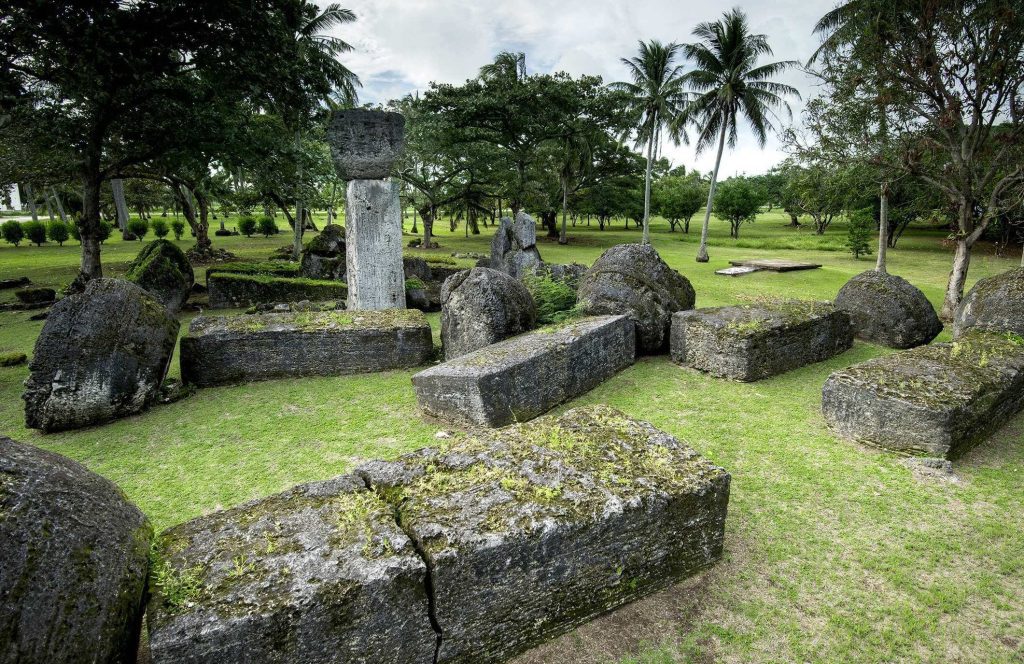 These 4.5m high stone pillars are thought to have been the foundation of the legendary Taga’s home. There are two versions of the narrative surrounding this location and its function Object() { [native code] }. In the first version, Taga, the headman, fell in love with Rota, a woman from another Mariana Island. In her honor, he gave orders to construct the most magnificent mansion ever seen, fit for a woman of such beauty.

The other version is very similar, except that Taga alone lifted every single rock to form the foundation of the house.

For more than 45 days and nights, American labourers and troops built North Field Airport, the world’s largest at the time. Tinian was regarded the ideal location for an aviation facility due to its proximity to Japan. As the name implies, it was from here that the two bombs that changed history and shocked the entire world were detonated.

After being abandoned, the majority of the airport has been reclaimed by nature. The systems used to load the bombs, on the other hand, have been preserved and turned into a monument.

The route to the most beautiful coral reef in the world

The little island of Rota has even fewer population concentrations than Tinian. Mount Taipingot, which stands at 150 metres and is the highest point in Rota, is a popular destination for hikers.

There are various Japanese temples scattered inland and along the beaches, as well as archaeological sites with monolithic pillars going back to pre-colonial times. Petroglyphs have been discovered in caverns near the town of Songsong, which are likely related to the holy cult of the Chamorro forefathers.

Caves of this type may be discovered on all of the archipelago’s islands; to get the most out of this historically rich experience, consult one of the numerous local guides. You may observe the beautiful hues of the Mariana Islands coral reef in this excellent film by Bruce Carlson:

Tweksberry Beach has the most stunning barrier reef length in the Mariana Islands. Every traveller interested in snorkelling should visit this island since it is completely unspoilt and bursting with life.

Northern Mariana Islands: paradise in the middle of the Pacific

These are only a few of the natural wonders that may be seen in the Northern Mariana Islands. Because tourism is the primary industry, Saipan and the other islands in the archipelago are well equipped to welcome visitors. The number of travellers who pick the Mariana Islands as a vacation destination is increasing year after year, and for good reason.

Historic sites are another major draw for visitors to these islands. Wrecks concealed in the water, plaques and monuments strewn across parks and museums allow you to get up up and personal with historical events. Furthermore, the caves with murals and monoliths found across the Mariana Islands date back much further in time.

There are many oddities to uncover on these islands, and every nook of this archipelago has a story to tell. For example, consider the case of Anatahan, which is completely uninhabitable owing to strong volcanic activity. Three Japanese ships were hit during the Battle of the Marianas, and some survivors swam to Anatahan and survived. They lived on the island unnoticed until a US military jet crashed there and several troops went to recover it.

The Japanese survivors were told that the war was finished and that they could return home, but they refused and remained on the island until 1951. Even now, the dwellings and utensils they erected for life on this island may be seen.

The Northern Mariana Islands actually provide everything you need for a fantastic vacation. Beautiful waves and beaches, history, oddities, and delicious local food. A single visit is all that is required to ensure that these magical and evocative places live on in the hearts of those who visit them.