DO I need ESTA to wisit Philadelphia? A pearl made in the USA

What to see in Philadelphia? A pearl made in the USA 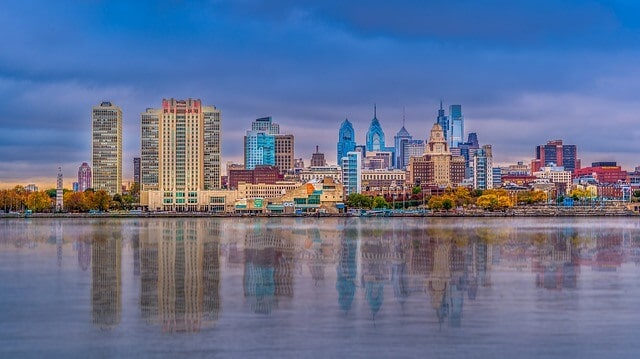 Philadelphia, usually known as Philly, is one of America’s most historic cities. The American Declaration of Independence was signed right here, and Philadelphia served as the country’s capitol from 1790 and 1800. Several nationally renowned universities, notably the Ivy League University of Pennsylvania, are also located in the city. Despite this, it appears that most Italian visitors choose to visit other cities rather than Philadelphia. Nonetheless, this is an excellent visit for anybody interested in history or in discovering the more European side of the United States. As a result, in this post, we will help you pick what to see in Philadelphia and learn more about its history.

Where is Philadelphia located? How to get there?

Philadelphia is the sixth most populous city in the United States and the biggest in Pennsylvania. It has a population of 1.6 million people, and its metropolitan area stretches all the way to Delaware and New Jersey. A true metropolis on the East Coast of the United States, it is thus quite accessible.

When to go to Philly?

The city’s climate is typically comparable to that of other cities on the United States’ East Coast. The seasons in Philadelphia often look like this:

What to see in Philadelphia: the Old City

Philadelphia has a lot to offer in terms of historical and cultural attractions. The Old City, or Città Vecchia, is arguably the city’s beating heart, distinguished by its traditional red brick structures. There are also many attractions here that are directly tied to independence and the American Revolution.

Independence Hall, previously the site of Philadelphia’s Congress, is the city’s most well-known landmark. In fact, under the guidance of Thomas Jefferson, the first American settlers signed the Declaration of Independence right here in July 1776.

Following the signing of the agreement, the thirteen American colonies declared their independence from the United Kingdom. Independence Hall is now a UNESCO World Heritage Site, with 2.5 million tourists each year.

The monument is situated in the same-named park, Independence National Historic Park. If you are staying in the city centre, you may simply walk there. Take care to purchase the correct ticket:

Also, keep in mind that admission is only available via a guided tour lasting 30-40 minutes. During the tour, the guide will give you with historical information to help you better comprehend this pivotal moment in American history.

The Liberty Bell, or “Campana della Libertà” in Italian, is also one of the most important symbols in American history. This bell was initially rung at the reading of the Declaration of Independence to the people. The copper and tin bell, which was installed in Philadelphia in 1751, was made in London at the Whitechapel foundry. 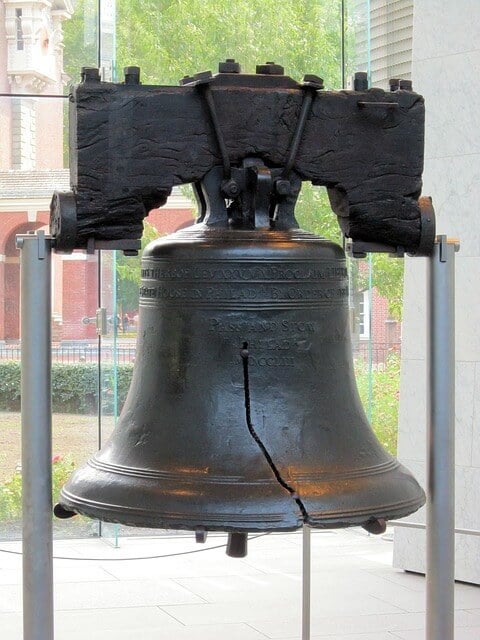 When you visit it, you will undoubtedly notice the massive fracture that defines it. Nobody knows what caused it, although it was most likely caused by normal wear and tear. Despite efforts to fix it on George Washington’s birthday in 1846, the crack widened.

The bell is housed within the Liberty Bell Center, which is open to the public. Once inside, you may also view various images and panels about the city and the United States’ history. The main drawback is the long line to enter the site owing to security checks at the gate.

Another symbol of the United States’ battle for freedom may be seen at 239 Arch Street. According to legend, the weaver Betsy Ross resided and worked at this home. Betsy would weave the first American flag in 1776, which had a star for each of the Thirteen Colonies.

Today, this mansion serves as a museum, educating tourists about the history of one of the oldest communities in the United States. The apartments have been decorated and kept to portray life as it was during Betsy Ross’ time. Simultaneously, you will have the opportunity to interact with masked performers who portray situations from ordinary life in the eighteenth century.

Finally, we arrive at Elfreth’s Alley, a true Philadelphia treasure. Many consider this little street to be the oldest in the whole United States. It is undoubtedly one of the tiniest, and finding it on a map of Philadelphia is much more difficult. However, we can assist you:

The roadway, which has been meticulously kept, dates from 1706. Instead, the 32 red brick buildings with colourful doors were constructed between 1728 and 1836. Walking along Elfreth’s Alley will undoubtedly transport you back in time. Take photographs with caution. The street is still inhabited today, and it is critical to respect the residents’ privacy.

You can tell how traditional it is in this photo taken from the site that grooms the street, Elfreth’s Alley; 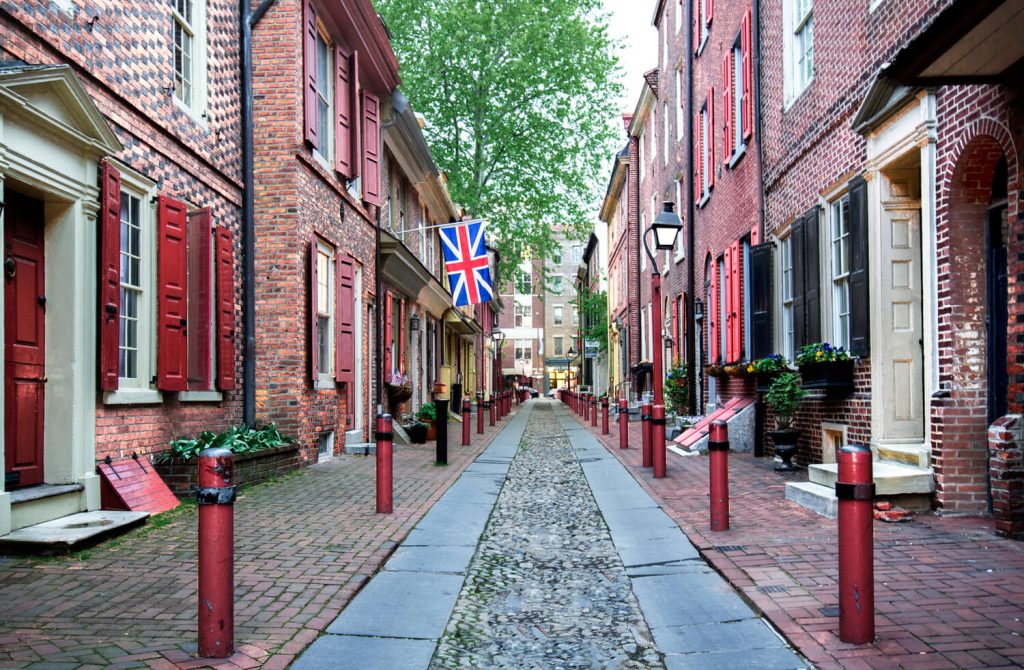 You can also go to the following places while walking down Elfreth’s Alley:

Visit the Philadelphia Museum of Art and its surroundings

Leaving the city’s historic area and heading towards Fairmount, you may visit one of the most important museums in the United States. The Philadelphia Museum of Art first opened its doors in 1876, as part of a centennial exhibition commemorating the hundred years of American freedom.

Since then, the museum has drawn millions of visitors and now houses over 240,000 works of art, including paintings, photos, and textile art. The museum’s collection of art spans more than 2,000 years, from current to ancient Egyptian. Degas, Picasso, Chagall, Van Gogh, and Mir are among the artists featured.

Finally, the admission fee is as follows:

Perhaps not everyone is aware that the 72 steps going up to the Philadelphia Museum of Art’s entrance are a significant draw. Fans may recall the memorable scene in which Rocky Balboa rushes up this staircase and agrees to chase his goal.

Boxing and Rocky Balboa fans have made it a pilgrimage site since then. Spend a few minutes in front of the stairs and you’ll witness scores of visitors sprinting and snapping photographs.

Even if you are not a fan of the Stallone series, we recommend that you spend some time at this attraction. In fact, you can get a great view of the Philadelphia skyline from here.

The Rocky Balboa Memorial Statue is another must-see for boxing and pop culture fans. Sylvester Stallone commissioned this 2-ton bronze statue in 1982 to shoot the Rocky trilogy.

Following the completion of filming, the city government opted to relocate the monument to the bottom of the stairway. It will be on your left as you depart the art museum. If you want to take a picture with Rocky, expect a ten-minute wait: there are many tourists who visit it every day.

One of the most dreaded jails in the United States may be found in the Fairmount area. The jail first opened its doors in 1829 and closed them in 1971. It was a novel structure at the time. The goal of Eastern State Penitentiary was to overhaul the whole country’s prison system.

This framework, in reality, claimed to foster a rehabilitation system for convicts rather than the old punishing one. For this reason, an isolation system was built, which led to the collapse of the structure, which became overcrowded.

Here are some things not to miss when visiting the famous US penitentiary:

More things to see and interesting activities in and around Philadelphia

If you still have time after seeing the city’s top attractions, there are a few more things to do in Philadelphia:

Although it is not yet well-known among Italian tourists, Philadelphia is the throbbing heart of American history. We can only propose that you visit if you want to learn about the country’s more European aspect and colonial heritage.

Philadelphia has much more to offer than historical landmarks. As can be seen, there is no shortage of things to do in Philadelphia. From Rocky’s iconic stairs to Philadelphia 76ers games, we’re confident that this city will not disappoint.